Tanah Lot is derived from the word “Tanah” means land and “Lot (lod / laut)” which means the sea, because it is situated on a rock in the sea and resembles a small island floating on the sea, so the people call it TANAH LOT, Tanah Lot temple is located at Beraban village, Kediri disctrict, Tabanan regency, on the south coast of Bali island, approximately 25 kilometers from Denpasar city. Pura Tanah Lot is situated on a large coral rock overlooking to the Indian Ocean. Tanah Lot is a Hindu shrine built to worship the God in its manifestation as the God of the sea (God Baruna) to invoke prosperity, and the balance of sea and earth.

Tanah Lot Temple history closely related to the sacred journey from Blambangan (Java island) to Bali island of a holy monk called DangHyang Nirartha to spread the teachings of Hinduism, the people also call him DangHyang Dwijendra or Pedanda Sakti Wawu Rauh. The ruler of the island of Bali at that time was Raja Dalem Waturenggong around 16th century.

In the Dwijendra Tattwa explained that at one time Dang hyang Nirartha come back to Rambut Siwi temple in his trip around the island of Bali, where the first when he had just arrived in Bali from Blambangan (Java island) on Çaka 1411 or 1489 AD, he stopped at this place. After being in Rambut Siwi temple for a while, then he went on his journey that leads toward East (Purwa) and before leaving DangHyang Niratha perform prayers “Surya Cewana” with people who were there. After sprinkling holy water (tirtha) against the people involved in doing worship, then he walked out of the temple walked toward the East. The journey traces the South coast of the island accompanied by some of the followers.

In this journey Dang Hyang Nirartha really enjoyed and was impressed with the beauty of the southern coast of the island of Bali with a natural beauty that is very exciting. He imagined how greatness Sanghyang Widhi Wasa (God Almighty) who has created the universe and everything in it that can give life to mankind. In his heart whispered that the duty of every creature in this world, especially human beings to express gratitude to God for everything he has been pleased to create it.

After a long walk and eventually he arrived and stopped at a beach, the beach consists of rocks and there are also spring, that rocks were called Gili Beo, “Gili” means small island and “Beo” means bird, so Gili Beo means small island of rocks that resembles a bird. In this area had been led by Bendesa Beraban Sakti who is ruler in Beraban village, then that’s where Dang Hyang Nirartha stops and rest, after a few moments of rest and then came the fishermen who wanted to meet with him and bring a variety of offerings for him. Then after the afternoon, the fishermen begged him to spend the night at their house, however all the petition was refused by him and he preferred to spend the night in Gili Beo, because from there he can enjoy the fresh air, beautiful scenery and release the views freely in all directions. On the evening before he went to rest, he gave teachings of religion, morals and teachings of other virtues to the people who came to there, but Dang Hyang Nirartha presence was not favored by Bendesa Beraban Sakti because its teachings are not in accordance with the teachings propagated by Dang Hyang Nirartha, and this led Bendesa Beraban Sakti to become angry and invites his followers to expel DangHyang Nirartha of the region, then to protect himself from the aggression of Bendesa Beraban Sakti, DangHyang Nirartha move Gili Beo to the sea and he created the snake from his shawl to always keep Gili Beo safe from malicious attacks. And after that moment Gili Beo changed its name to Tanah Lot (land in the sea). After seeing the miracle of DangHyang Nirartha, Bendesa Beraban Sakti finally succumbed and became a faithful follower of Him to teach Hinduism to the population, and for his services Dang Hyang Nirartha provide a kris to Bendesa Beraban Sakti before continuing his journey (The kris or keris is a distinctive, asymmetrical dagger from Indonesia. Both a weapon and spiritual object, krises are often considered to possess magical powers. The earliest krises known were made around 1360 AD and most probably spread from the island of throughout Southeast Asia). The kris given to Bendesa Beraban Sakti is called Jaramenara or kris Ki Baru Gajah, until now the keris Ki Baru Gajah still exist and saved as well sanctified in Puri Kediri. At the time DangHyang Nirartha advised the people to build a temple (parahyangan) on Tanah Lot because according to his sacred inner vibrations and supernatural guidance that this place is a good place for a worship to the God, from this place then people can adore greatness of God in manifestation as the God of the sea to invoke the safety and welfare of the world.

There are 8 holy temples in surrounding Tanah Lot area, each with its own function and purpose.

In 1980th the Tanah Lot temple’s rock face was beginning to crumble and the area around and inside the Tanah Lot temple started to become dangerous. There were some projects supported by Japan and Germany carried out to conserve the historic temple. 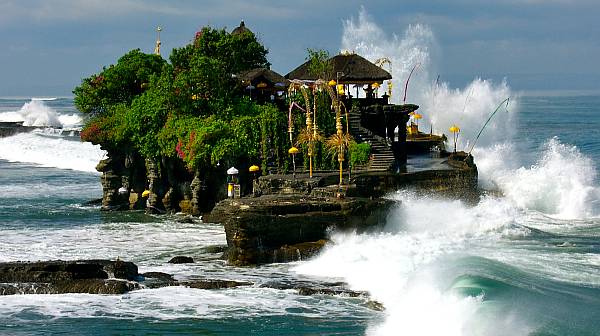 Tanah Lot temple ceremony is held every 210 days (6 months) and according to the Balinese calendar the anniversary of Tanah Lot temple is held on the Buda Wage Langkir, four days after Kuningan Day. Before entering the temple, the prayers must first pray at Beji Kaler, Beji Kaler is a sacred spring which is located just below the Tanah Lot temple, before the prayers go to the main temple they must pray in advance here and drink the holy water of this spring in order their souls to be cleaned and sanctified before entering and praying in the main temple. During the ritual in Tanah Lot temple, Balinese people would come to pray and even some of them also come from several regions in Indonesia. The festival will take place (nyejer) for 3 days.

The uniqueness of Tanah Lot accompanied by local mythology associated with the holy snakes, the sacred serpents of Tanah Lot are believed to be the savior of the threat of crime and damage. the scientific name of this snake is Bungarus Candidus, highly venomous sea snake that has a color such as black and white circular rings on its body. This sacred snake is believed to be the savior of Tanah Lot temple, this snake will attack those who would do damage in Tanah Lot temple but this snake remains docile and silent when in a cave on the edge of the rocks. Each visitor can even touch this snake without worrying counterattack of the snake and of course we will be accompanied by someone who understand the character of the snake. Another belief that add elements to the mythological of holy snake of Tanah Lot is by touching it while praying then what we pray will come true, a mythology dependent we believe it or not.

Tanah Lot is a very famous tourist destination in the world and it’s one of the best attractions in Bali island, every day Tanah Lot visited by thousands of visitors both domestic and foreign tourists. Very recommended and best time to visit Tanah Lot is when the sunset time starting at around 4.00 PM until 7.00 PM, for those who love photography at this time is golden hour or magic hour and if the weather is good we can capture an amazing sunset and enjoy unforgetable spectacular and astonishing sundown sight. Visitors can stay close and walk beside the temple when low tide but it’s not recommended and too dangerous when high tide, Tanah Lot is very suitable to serve as a family holiday and also there are adequate facilities such as hotels, restaurants, sunset terrace, Tanah Lot cultural park, art shops, parking area, emergency facilities, security facilities, toilets, rest area, and information centre.